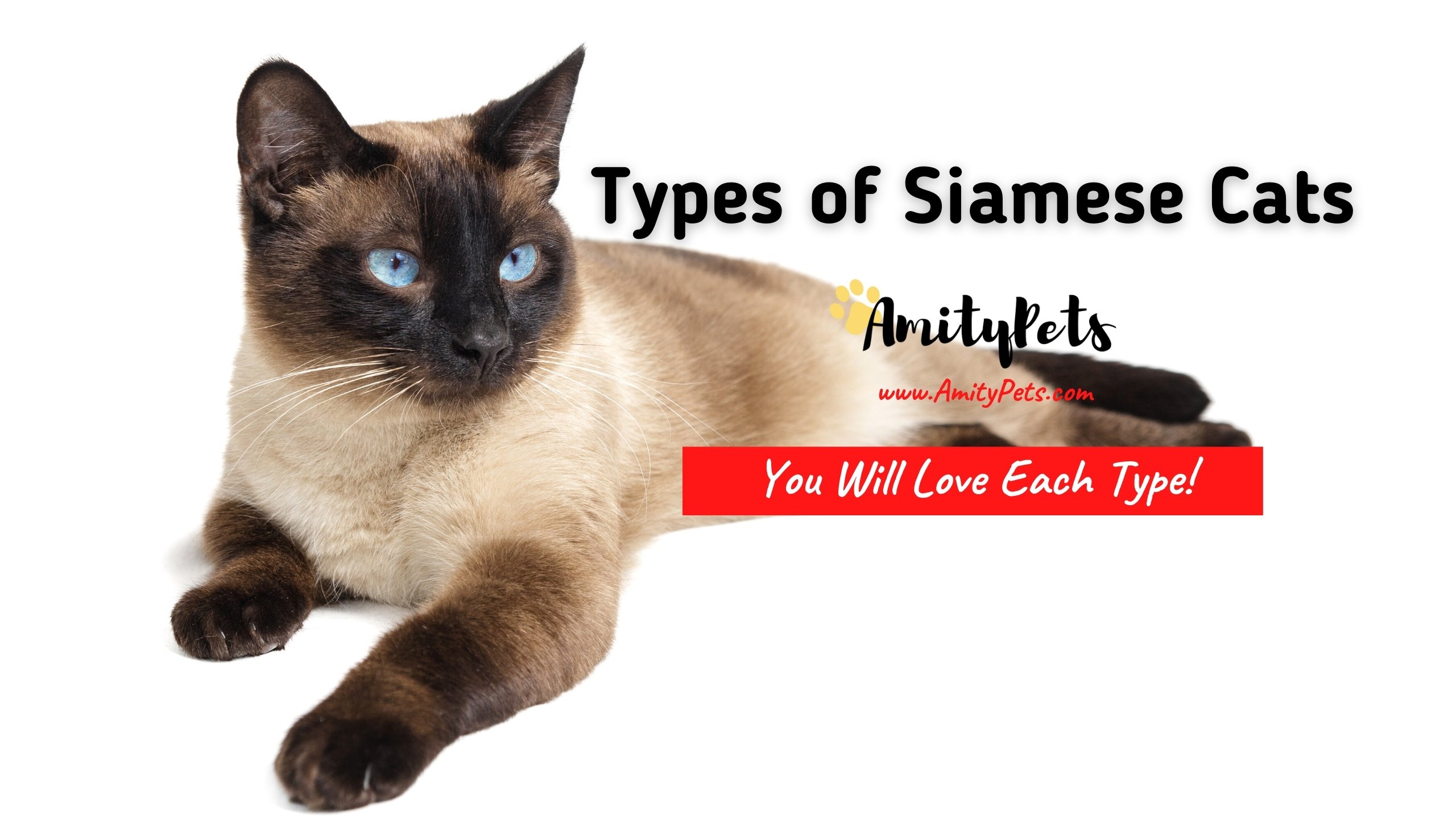 The Siamese cat breed is one of the most popular cat breeds in the world, but did you know that there are many different types of Siamese cats? Siamese cat types vary depending on their coat type and head and body shape.

Of course, every Siamese cat should have the same pointed coat pattern, a nice long tail, and large ears as is characteristic of the breed.

However, there can be some differences in the color of their pointed coats and their general body shape.

In this article, we will be explaining everything that cat lovers need to know about the different kinds of Siamese cats.

Keep reading to learn about the different coat colors and body types that the Siamese cat can have.

Here are the characteristics of each type of Siamese cat type and how to tell the difference between them.

The Applehead Siamese cat is another one of the traditional types of the Siamese cat breed, and they are known for their round, apple-shaped heads and a more muscular body than other Siamese cat types.

The stockier Applehead Siamese cat tends to have dark brown points and a cream-colored body similar to the other types of traditional Siamese cats.

They are also known to have a shorter tail than other Siamese cats.

Applehead Siamese cats are thought to be the closest in appearance to the original Thai cats found in the ancient Kingdom of Siam.

This has given them a lot of appeal to Siamese cat lovers throughout the world.

This is probably the type of Siamese cat that most people think of when picturing the breed. Classic Siamese cats have a long nose and a slim but round head with large pointed ears.

Additionally, these cats are known to have a  long neck, body, and tail.

Classic Siamese cats tend to have dark brown points and a cream-colored body, and they should all have bright blue eyes.

The classic Siamese is one of the three kinds of traditional Siamese cats along with the Applehead and Old Style Siamese.

The classic Siamese cat is pretty similar in appearance to the old-style Siamese, but there is a way to tell the two apart.

The main distinguishing feature of the classic Siamese cat is that they lack the dip in their nose, which is a characteristic that the old-style Siamese cat has.

The Modern Wedge Siamese cat is one of the more common Siamese cat types seen today, and they are famous for their wedge-shaped heads, triangular faces, long legs, and sleek bodies.

Modern Siamese cats are very similar in appearance to the Oriental cat breed when it comes to their head and body type.

Unlike the Oriental cat though, the modern Siamese must have big blue eyes and a pointed coat pattern in an officially recognized color in order for them to be officially considered a Siamese cat. This is according to their breed standard.

Old Style Siamese cats almost appear to be a cross between the Applehead Siamese cat and the Modern Siamese cat.

This is because the old-style Siamese has a rounded head that is fairly similar to the head of the Applehead Siamese.

They also have a long and slender body that is closer in resemblance to the Modern Siamese’s body type.

Although the old-style Siamese cat reached their popularity peak around the 1960s, they can still be found today.

This is because some Siamese cat fanciers have preserved this style of the Siamese breed due to its beautiful and unique appearance.

In order to have official recognition by the Cat Fanciers Association or the International Cat Association, Siamese cats must have a pointed coat.

The blue point Siamese cat has points that are a deep blue-gray color, and they will have a blueish-white body as well.

A solid seal pointed Siamese cat will always be officially recognized according to the Siamese cat breed standard.

A blue tabby pointed Siamese cat will sometimes be officially recognized as well.

Chocolate point Siamese cats are popular because their points are very striking and they have a very beautiful coat.

Lilac Siamese cats tend to have the lightest coat color out of all of the officially recognized Siamese coat types.

The Seal Point Siamese cat is possibly the most common among Siamese felines. The seal point Siamese will have very dark brown points and a body that has brownish white fur.

The seal point has the darkest body out of any of the officially recognized coat types.

These cats have a pointed pattern just like all other Siamese cats, but these points also contain a tabby coat pattern.

The lynx point Siamese can come in almost every Siamese point color. This includes officially recognized point colors and other Siamese color types.

There are some other Siamese coat color types that are not officially recognized by the Cat Fanciers’ Association.

Apricot point Siamese cats have point colors that lie somewhere in between red points and cream points. The result is a point color that is a very pale shade of orange.

Like both red and cream point Siamese cats, apricot Siamese cats are not officially recognized by the CFA or TICA.

The caramel point Siamese cat has even lighter points than the Cinnamon Siamese cat. Caramel points have very light brown or warm gray points with an ivory body.

The primary difference between the two is that the Cinnamon point Siamese has a lighter brown coat with an almost rusty hue.

Cream point Siamese cats have very pale, cream colored points that are difficult to distinguish from the white fur on the rest of their bodies.

Like the red point Siamese, cream points are not officially recognized by breed clubs due to crossbreeding being necessary to create this point color.

Cream point Siamese cats are created by breeding a red Siamese cat to an Abyssinian cat and a red Domestic Shorthair cat.

Due to all of this crossbreeding many people do not recognize cream point Siamese cats to be a Siamese cat at all.

The red point Siamese is also sometimes referred to as the flame point Siamese, and they are known for their bright or pale orange points.

The red point Siamese is not officially recognized by the cat fanciers association because this point color was created by crossbreeding Siamese cats with orange tabby cats somewhere in their genetic line.

The result of this breeding is a cat that has points in the Tortoiseshell pattern.

Tortie point Siamese cats can have a combination of many different colors, and they can even include the tabby pattern as well.

What You Need To Know Before Getting a Siamese Cat

No matter what color of Siamese cat you have or are planning on bringing into your family, there are some things that are helpful to know.

For instance, knowing what kind of personality a Siamese cat typically has and what health problems to look out for will make you well prepared for your new pet.

What Are Siamese Cats Like? Well, Siamese cats are generally known to be very social and confident cats.

The Siamese cat is also famous for its loud voice, and they are generally very vocal cats. The only exception to this are applehead Siamese cats who tend to be a bit quieter than the others.

Like many other types of cats, Siamese cats love to climb and play, so having a cat tree and plenty of cat toys is definitely a good idea.

When it comes to grooming the Siamese cat tends to be relatively low maintenance due to their sleek, short hair.

However, you may need to pay close attention to their dental hygiene. Ensuring that you are feeding your Siamese a healthy diet is very important as well.

What are the most common Siamese Cat health issues?

The Siamese cat breed is generally known to be very healthy thanks to careful selective breeding, but some medical concerns can still occur in Siamese cats.

Here is a short list of medical concerns that can occur in Siamese cats.

To help you make sure you have a great name for your great Siamese cat here are some of the most popular.

Siamese cats are known to be a fairly good pet choice for families.

This is because Siamese cats are generally known to be pretty friendly and behave well around children, other cats, and even dogs when socialized and introduced to them properly.

How Can I Tell What Kind Of Siamese Cat I Have?

The best way to tell what kind of Siamese cat you have is by looking at your cat’s head shape, body shape, and coat color.

Today most Siamese cats have a modern body type and one of the four officially recognized coat types.

How Can I Tell If My Siamese Is Purebred?

Usually, you can tell if a Siamese cat is purebred based on its appearance.

However, the only way to know for sure if a cat is a purebred Siamese is through genetic testing or by looking at their pedigree if one is available.

How Many Types Of Official Siamese Coat Types Are There?

There are four official coat colors according to the Siamese breed standard. These are blue point, seal point, chocolate point, and lilac point.

Some breed clubs also allow for the tabby pattern in these point colors as well.

Why Are All Siamese Kittens Born With All White Fur?

Siamese kittens are born with a pure white coat because their mother’s womb was at a constant warm temperature, and this makes their body the same temperature throughout.

As Siamese kitten gets older they start to develop darker points in areas where their temperature is lower such as their feet, tail, face, and ears.

The Siamese cat is one of the oldest breeds, and they continue to be a cat breed that is commonly seen up until this day.

Although some Siamese cats are seen with a wide variety of colored points, only seal, chocolate, blue, and lilac points are officially recognized for the Siamese cat breed. 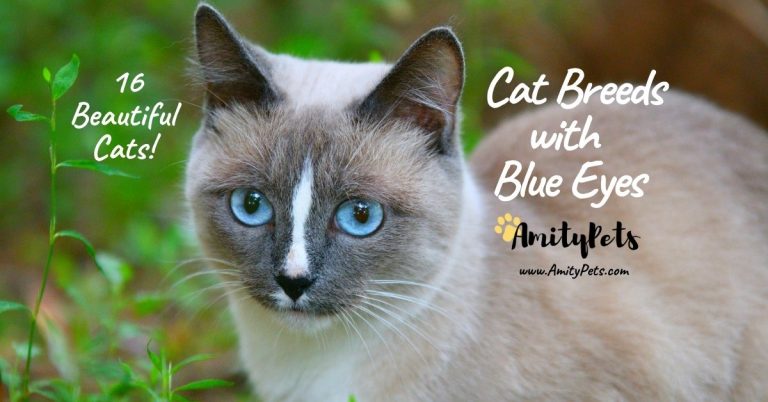 Many different cat breeds can have blue eyes including the American Shorthair, the Siamese, and more. However, some white cats with blue eyes are born with birth defects such as deafness. Albino cats will have blue eyes but they are different from the cats on this list because albinos have no pigment in their eyes…. 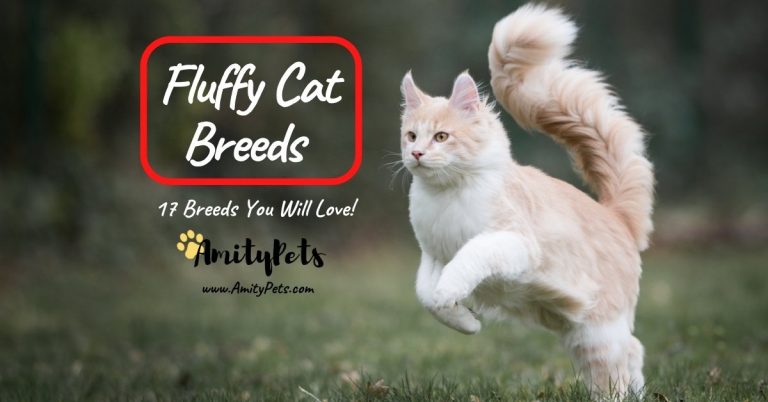 Cats with fluffy thick fur coats are some of the most popular cat breeds. They are cute, friendly, intelligent, and make great family pets. Many of the fluffy cat breeds listed below have silky smooth fur and fluffy tails. Below are 17 of the fluffiest cat breeds that grace the Earth! British Longhair Cat The… 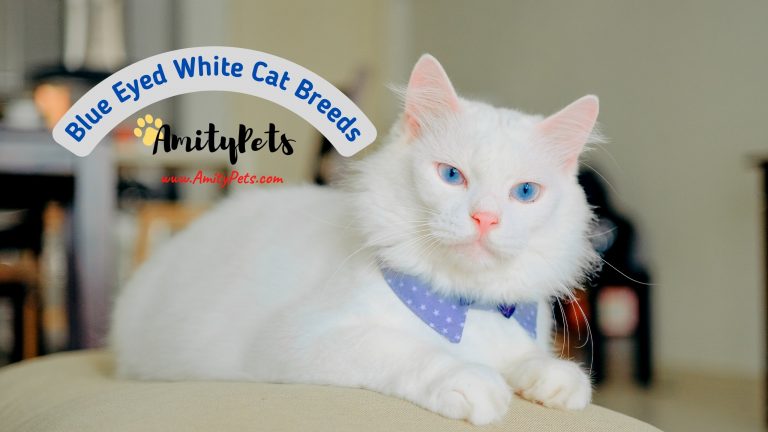 White cats with blue eyes are truly stunning animals but are they not necessarily rare. These stunning cats are very popular with cat lovers. Many cat breeds can have white fur and deep blue eyes. They range from the somewhat rare Turkish Angora to the incredibly common American Shorthair.  In this article, we will be listing… 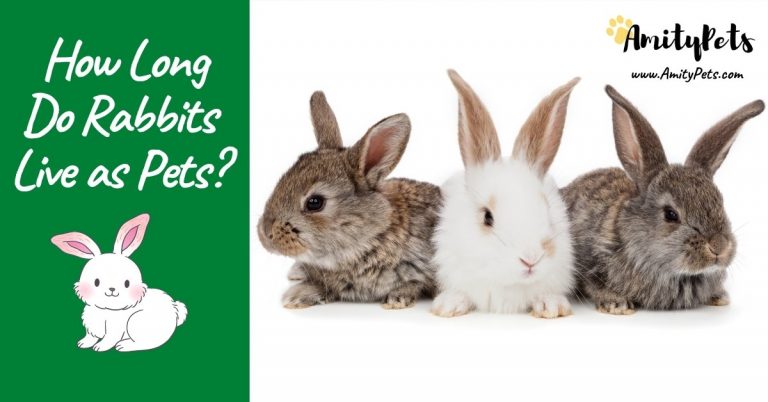 Pet rabbits can live to be eight to ten years old if well taken care of. There have been cases of pet rabbits living even longer. In contrast, it is not unusual for a rabbit in the wild to only live one to three years. The lifespan of a rabbit is determined by many factors,… 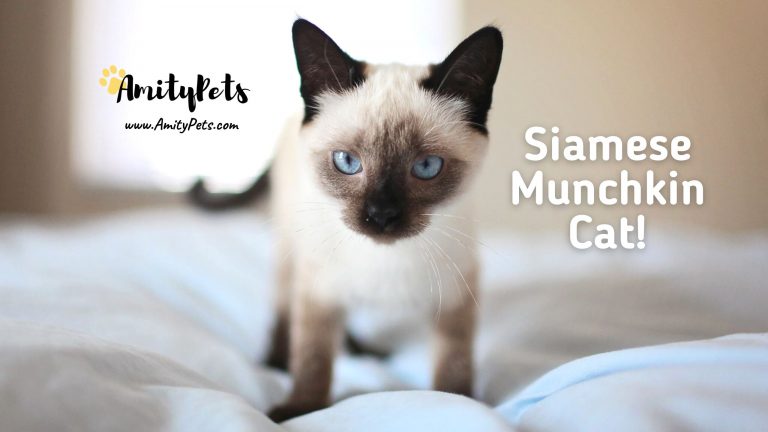 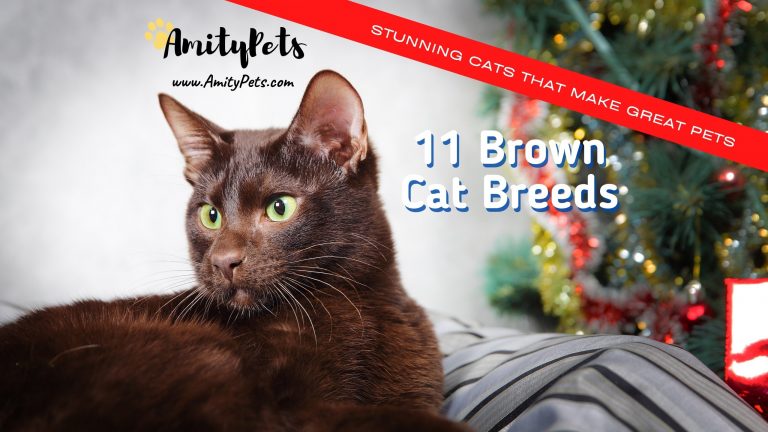 Brown cats are definitely among the cutest kinds of cats but did you know that brown cats are also fairly rare?  Brown cats are not very common. However, there are several different cat breeds that can have brown fur. This includes the stunning Havana Brown, the Oriental Shorthair, the Persian, the York Chocolate cat, and…