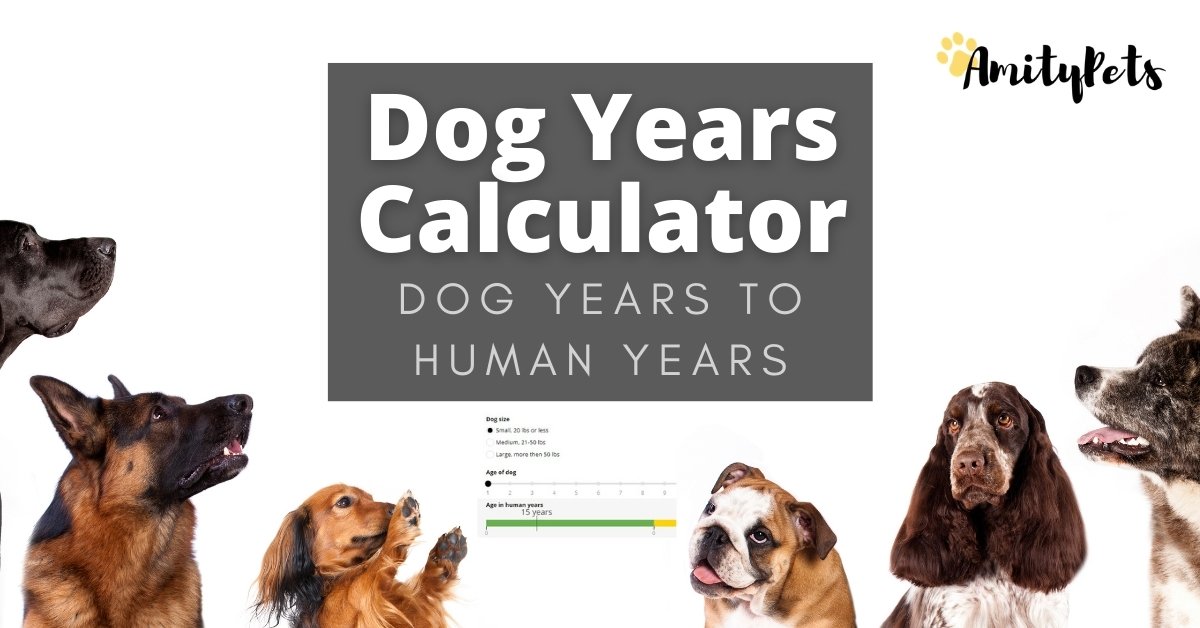 How old is my dog in human years? People have always used the formula of one dog year equaled seven human years. Scientists now suggest the 1:7 ratio is not correct. New studies show that dogs age more rapidly when they are young compared to humans. It is not a straight line comparison between dog years and human years but instead a linear one.

Want to find out how old your dog is relative to human years? Try out our Amity Pets dog years calculator below and see what you find out!

Dog Years to Human Years: Why Does it Matter?

So why does it even matter comparing dog years to human years? Really it comes down to the health of your dog.

Having an idea of how old your dog is relative to human years makes it easier to put in perspective the possible health issues your pet may experience. The “age” of your dog can also help veterinarians better diagnose and treat your beloved family member in a time of need.

The goal is to help your dog live a long healthy life.

There is a recent study by the University of California San Diego School of Medicine that attempts to shed more light on the relation of dog years to human years. The old, one human year to seven dog years ratio is out the window.

The study took a unique approach of comparing something called “methyl groups” in the subject dogs and humans genes (DNA) and came up with a completely different way of comparing age.

Keeping it simple, dogs age much faster in their early years than previously thought. The study gives a practical example of a dog can have babies at less than one year old.

The graphic below provides a means to visually see the results of the study that comparing dog years to human years is a linear progression.

Yes, the breed of a dog does make a difference in how long their lifespan is. Mostly, based on the size of the dog breed.

What Dog Breed Lives the Longest?

If you want a dog that lives the longest the simple method is to think small.

How Long do Small Dogs Live?

Here is a brief list of small dog breeds that live the longest, in no particular order. It is not unusual to see many of these breeds live beyond 15 years.

How Long do Big Dogs Live?

Here is a brief list of dogs with the shortest lifespan, in no particular order.

Yes, smaller dogs do live longer than bigger dogs. This may be puzzling to some because we all know that, in general, larger animals seem to live longer.

Research by evolutionary biologist Professor Mark Elgar of the University of Melbourne’s School of Biosciences simply states that larger dogs don’t live as long as smaller dogs because they age more quickly. This rapid aging leads to a point where their bodies break down and stop functioning.

“We conclude that large dogs die young mainly because they age quickly.”, Professor Mark Elgar. He also added, saying the rule of thumb is that “the average lifespan for quite large dogs is about seven years, and 14 years for smaller dogs.”

It is wise to remember when making a decision on a family pet that some larger dog breeds may only live around seven years. Most people don’t know that.

When is a Dog Old?

We all love our dogs and it is sad seeing them grow old in what could seem like a short amount of time.

So when should you think of your dog as being old? Age is subjective. Just as with humans what some may consider old others may not.

Depending on the size of the dog, generally, they could be considered old, or “getting old” around seven to eight years. This can also vary based on the breed of dog, and your opinion! Dogs do seem to be living longer now though due to the advances in veterinary medicine.

The key point is to realize that just because your dog is only a “young” seven years old it does not mean they can still do everything they did when they were two.

While it is very rare for a dog to live 20 years it does happen. As we stated above most cases of this phenomenon is with smaller dogs. Check out the list above of smaller dogs that love longer if you missed it!

The Guinness Book of Records states that the oldest dog ever was Bluey, an Australian dog that worked cattle and sheep for 20 years! Old Bluey, who died in 1939, lived for 29 years and five months.

Signs Your Dog is Dying of Old Age

No one is happy thinking about if their dog may be dying of old age but it is important to recognize the signs. Sometimes your dog is just sick and not dying. You may be able to catch these signs early and take some preventive action.

What can you do if you see these signs?

According to Fondazione Capellino, a non-profit philanthropic organization, cats and dogs’ lifespans are twice as long today as they were 40 years ago. Good news! They say the same factors that are allowing humans to live longer now apply as well to our pets.

The general consensus among people who study such things conclude that dog grow and mature much faster than humans and this accelerated pace results in a much shorter lifespan.

Can We Make Dogs Live Longer?

In general, yes you can! Providing your dog with good quality dog food, a good living environment, and regular visits to your veterinarian can increase the lifespan of your dog.

According to Steven Austad, Ph.D., a professor, and chair of the Department of Biology at the University of Alabama at Birmingham spaying or neutering a dog can result in a longer life for the animal.

“It is important to spay and neuter your pets, not only for their protection but also for the benefit of the community,” Austad said. “Many dogs who struggle with disorders associated with intact dogs end up being put to death.”

Do Cats Live Longer than Dogs?

Yes, according to most studies the average lifespan of a cat is longer than that of a dog. One of the reasons given are that cats tend to be more solitary in nature and this could result in them being exposed less to infectious diseases.

Cats also may be better at protecting themselves because they are more nimble, have sharp claws they use well as weapons’, and possibly a greater sense of avoiding dangerous situations.

Is it realistic to even compare dog years to human years? Kind of. Do these dog years calculators really work? Well, they work to a certain extent but keep in mind it is all just a guesstimate people created.

Dog age calculators are just a tool to help you in your quest for a happy and healthy dog.

Knowing your dogs ‘true’ age is a good thing and can help you take better care of your pet. 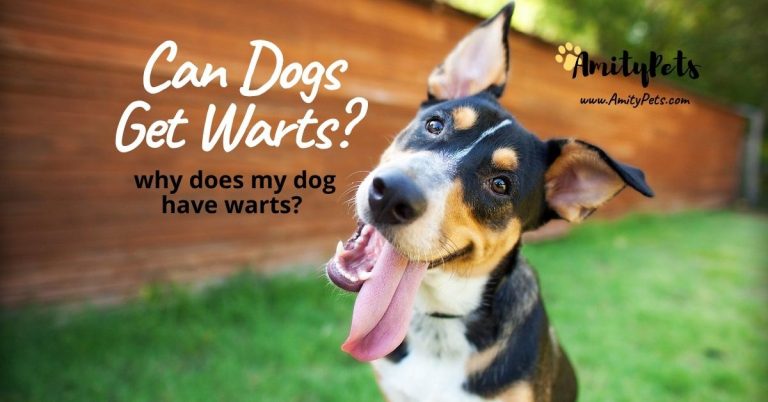 Dogs can get warts. Warts (Viral Papillomas) are a common skin condition in dogs. They can occur for a variety of reasons but are often caused by the canine papillomavirus or from trauma to the dog’s skin. Dog warts are an unsightly growth that appears on the surface of your dog’s skin, typically around their… 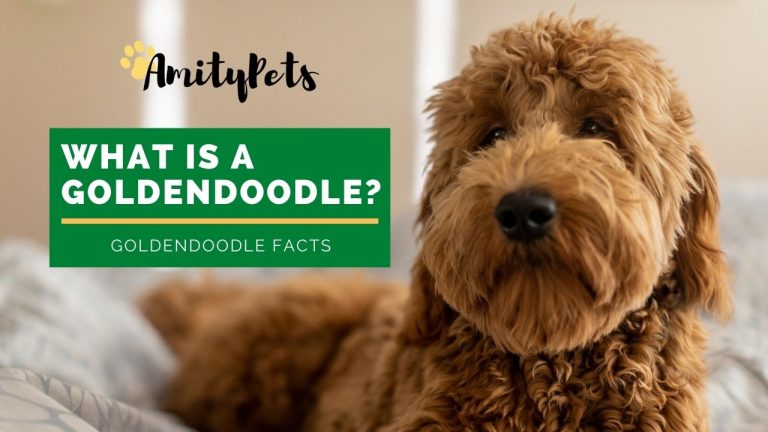 The Goldendoodle is a crossbreed dog, mixing a purebred Poodle and a purebred Golden Retriever. The goal of mixing these two breeds was to develop a dog with a good personality, that was smart, had an interesting look, and was hypoallergenic. Goldendoodles are not a recognized breed. The Goldendoodle hybrid dog has become very popular… 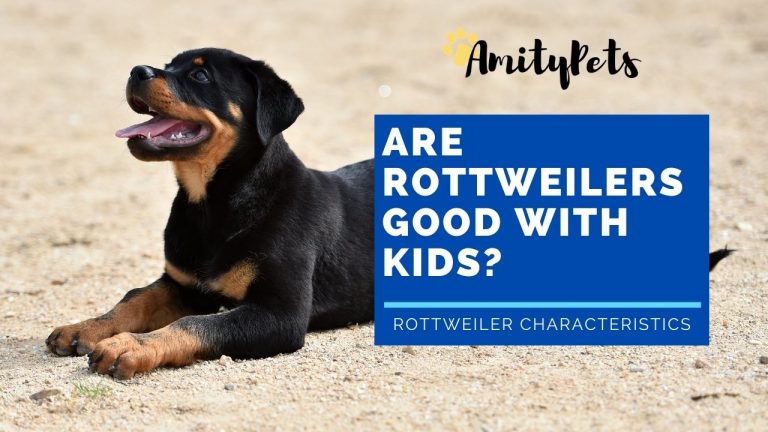 Rottweilers are renowned among their fans for being superb family dogs that are great with kids, but is this breed really a good pick for your family dog? Here is what you need to know about choosing the Rottweiler as a family dog and what families this breed is best suited to.  Are Rottweilers Good… 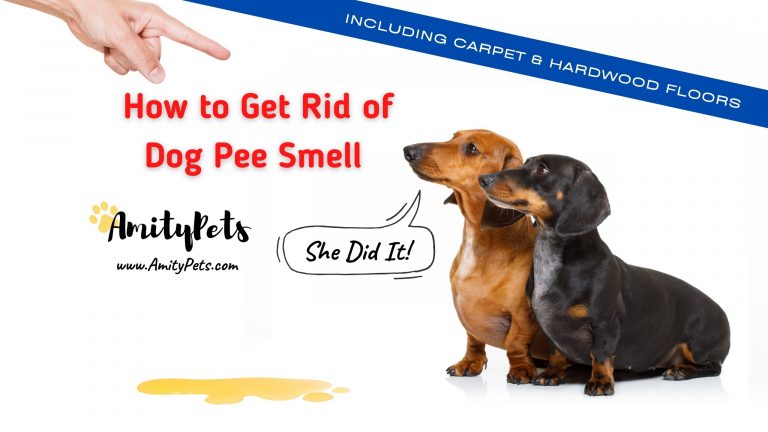 No one likes to come home and find that their dog has had an accident, especially when that accident has occurred on your new carpet or nice hardwood floor! The key to getting out dog pee smell from your carpet is to use an enzymatic cleaner. Most normal household carpet cleaners will not work to… 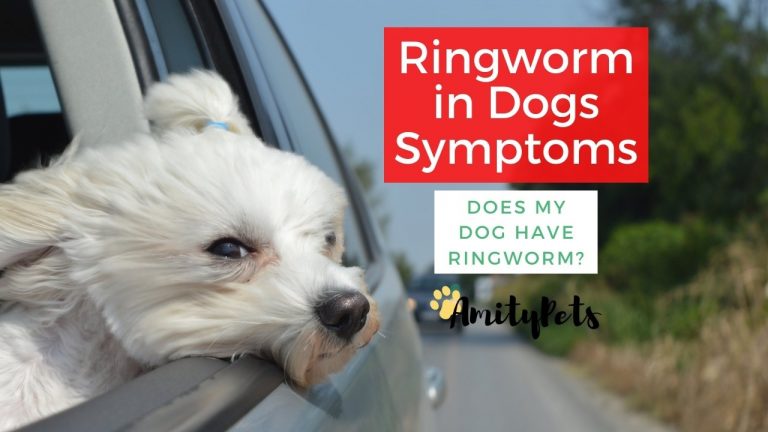 Your pet can encounter all types of health issues and one of them is parasites. Ringworms, roundworms, and tapeworms all fit into this category. Ringworm symptoms commonly appear as a roundish, red ring on the skin of your dog. These red lesions can be scaly and show up in many areas including the dog’s legs,… 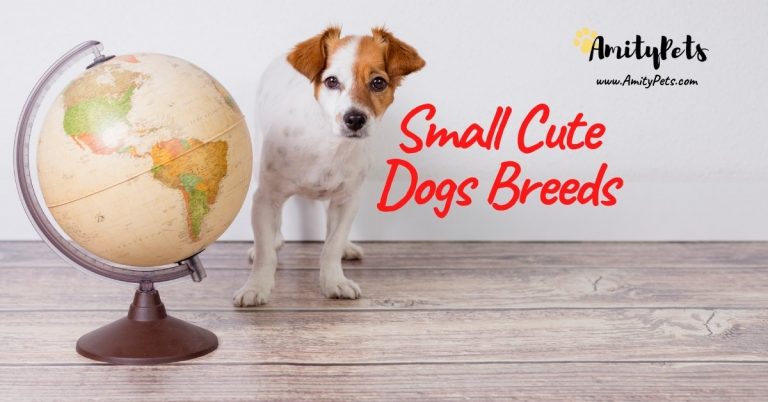 Small cute dog breeds are great for those living in apartments or small spaces and for people who want a lapdog. Small dogs can be a good choice for families with busy lifestyles as they are full of energy and spirit. Many say the Yorkshire Terrier is the most popular small dog breed. There are…